How to Draw a Cartoon Crocodile

Ever wanted to go swimming with a crocodile? Yeah, me neither. Anyway! In this tutorial I’m going to show you how to draw a cartoon crocodile.

How do you draw a crocodile? If you look at Step 2 below, you’ll see that their overall shape can be captured simply with two rectangles and a triangle. Yes, yes, our croc is standing on his hind legs and drinking coffee, but that’s just how they do it here in Australia.

Before we begin, if you need information on what equipment to use for cartooning, check out my Recommended Equipment page. Also, if you are interested in more detailed step-by-step video lessons on how to draw cartoons, check out my Online Courses page. 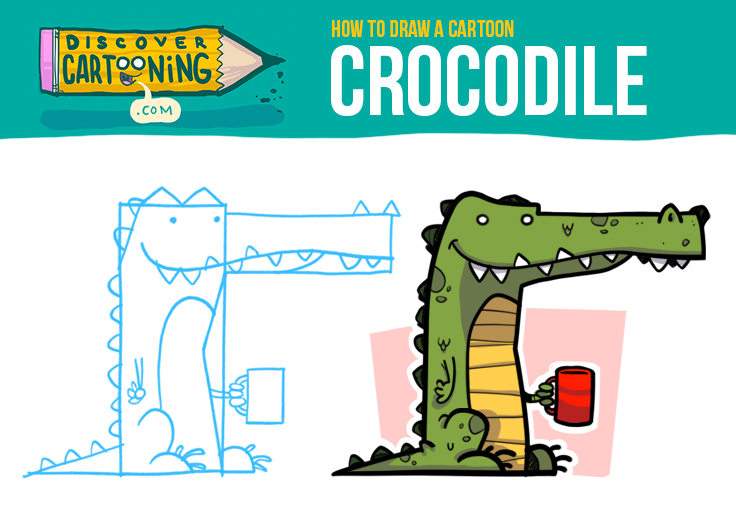 Crocodiles look suspiciously similar to alligators. But! Crocs have wider heads and when they close their mouths, both their top and bottom teeth stick out. Whereas alligators only have their top teeth sticking out. Okay that’s all the boring facts that you’re getting for now, let’s do some drawing!

Before we begin, let’s just quickly go over the important traits of our croc design.

The first thing to remember when learning how to draw a cartoon crocodile is… look at some not so cartoony crocodiles first! Jump on Google images and observe a few photos to better understand your subject. A normal crocodile (unlike our coffee drinking biped) is long and comparatively thin. Our croc is anthropomorphic (an animal with human traits), which means he’s going to be bending at the tail and bending at the neck, with his snout pointing forward (making him look a little more human!). In fact, if you squint your eyes while looking at him, he’ll look like an S (not really, but thank you for squinting anyway).

His scaly skin is green, with yellow on his belly – I’ve also added in a bit of dark green for the scales on his back. On the colour wheel, the opposite of green is red, so I made his coffee cup a rich red to contrast with the overall green character.

The crocodile in this tutorial was created in Adobe Photoshop, but you can use pens, pencils, or markers – whatever you’re in to! If I’m drawing cartoons on paper, I often like to use pens for the outline and coloured pencils for when I render. You can use whatever medium you like, but the materials I use when drawing cartoons are as follows:

Okay, let’s start doing a croc – First of all, we gotta sketch!  (because sketching is super duper important!)

How to Draw a Cartoon Crocodile Part 1:

The first thing required when learning how to draw a cartoon crocodile is to do a bit of sketching! Please note that the steps below are very neat – when you’re sketching, you don’t have to be this precise, just draw confident light pencils strokes until you are happy with the image that you are producing. If you make a mistake, simply erase it and keep on going! Have fun!

Step 2: Draw a small triangle for his tail (Notice how we now have three shapes all of different sizes – this will add some subconscious interest to our character, instead of having everything the same size)

Step 3: Now add in some details on his snout with a big smile and a little jaw

Step 4: For his neck and belly, carve out a small triangle from the front of the large rectangle

Step 5: Give our croc a pair of dotty eyes. Also, crocodiles have those cool looking bumpy things at the top of their heads, so add in two small triangles above his head which will become part of his overall head shape later. Add two tiiiny triangles at the end of his snout – these will become his nostrils

Step 6: Now put in his hind legs by adding in some curves at the bottom of his body

Step 7: Time for some tiny arms! (Yes, I know, this looks ridiculous because crocodile hind legs and front legs are similar in size). Make his arms short and thin with tiny little ovals for his fingers. For his hand holding the coffee, just draw three ovals one on top of the other, then draw in a rectangle for his mug and connect the mug to his hand with a handle

Step 8: Now let’s add in some exciting bumps and sharp things! Draw in his scales going along his back and some teeth poking out from his mouth – make sure to keep them randomly spaced and randomly sized. Keeps things interesting!

Step 9: Finally, add in a candy cane shaped curve for his belly and give him some nice curly claws on his feet

Okay, we have completed our foundation! Now let’s move onto some inking.

How to Draw a Cartoon Crocodile Part 2:

The second thing required when learning how to draw a cartoon crocodile is adding ink! In the inking stage, notice how some lines are thicker than others. Compare his body outline with his little scales and spots. One of the secrets to detailed cartoons is to have your main shapes drawn with a thick line and your small details drawn with thin lines. It’s amazing what a few thin pen marks can do to an illustration! If you’re drawing with paper, make sure you have a thick pen and a thin pen. If you’re using Adobe Photoshop, create a new layer called ‘INK’ and do all of your inking on this layer.

In this section we are going to start at the feet and move clockwise around the body. Good luck!

Step 10: Ink a single horizontal line following the bottom of his tail, feet and belly. Draw in his hind legs with a little skin fold where his leg meets with his body

Step 11: Draw in some little circles for his eyes. Then draw a diagonal line for the top of his tail and a single line going along his back to the top of his head. Notice how the left triangle on his head has been smoothed out and has become part of this single line. Now draw in a small vertical line next to his eye and don’t forget to put in a little skinfold between his tail and back!

Step 12: Draw in his triangular nostril and then draw a straight, horizontal line going along the top of his snout. Next ink in his smile and friendly looking teeth!

Step 13: Draw a single curve going from his jaw, down his neck and belly and ending at the ground.

Step 14: His hands are very small, so make sure you ink these in with a thin pen, otherwise your sketch may lose a lot of detail if you’re using a thick pen. For his mug, make it look three-dimensional by replacing the mug’s horizontal sketch lines with slight curves

Step 15: Now add in the croc’s scales going along his back

Step 16: For our final step in the inking stage, add in the details. Using a thin pen, draw in some random circles and scales all over his body. Put some shadow on his background leg, scales and nostrils. Also, add in a couple of background teeth and shade them in. Finally, add in some none-parallel straight lines going along his belly.

That’s our inking done – let’s now move onto the colouring!

How to Draw a Cartoon Crocodile Part 3:

The third thing required when learning how to draw a cartoon crocodile, is colouring in! If you’re colouring with pencils, it helps to add two or three layers of colour to your cartoon. If you stop at one layer, it may look quite washed out. If you’re using Adobe Photoshop, create a new layer called ‘COLOUR’ and put it below your ink layer. Then simply select the desired colours and add them to your croc.

Step 17: Colour in his main body with light green, his belly with yellow and his scales with dark green. For his mug , colour it with a nice, rich red. Remember to leave his eyes and teeth white

Step 18: Shade in the areas on his jaw and neck, next to his legs, on his tail and on his mug. If you’re using coloured pencils, just lightly shade over your colours from Step 17 with a purple pencil. If you’re using Adobe Photoshop, use a dark purple and colour in your shadows on a new layer above your image, then lower the opacity to get a transparent effect. Transparency is important here because you want the base colours to show through the purple.

Finally we did it! We have drawn a cute little crocodile with his cup of coffee.

If you followed along drawing with me in this lesson, the next step is to try and design some more crocodiles. Maybe change his eyes to make him look scary. Perhaps turn your croc into a dragon by giving him some wings and smoke coming out of his nostrils.

Whatever you do… whether you’re drawing dragons or something else… I hope that you will always find the time to practise drawing and have fun!

I hope you have enjoyed learning how to draw a cartoon crocodile, if you are ready to get started with cartooning, feel free to check out some of my online courses here: https://www.discovercartooning.com/courses/