How to Draw a Cockatoo

In this article, I’m going to show you how to draw a cockatoo. There are many types of cockatoos in the Pacific, but for this lesson, we’ll be drawing a Sulphur Crested Cockatoo (famous for having one of the greatest hairdos in the animal kingdom). I live in Australia and I get to see these little dudes everywhere!

How do you draw a cockatoo? You will need to focus on capturing three of its notable features:

If you can draw these things right – then you’re well on your way to drawing a cockatoo! 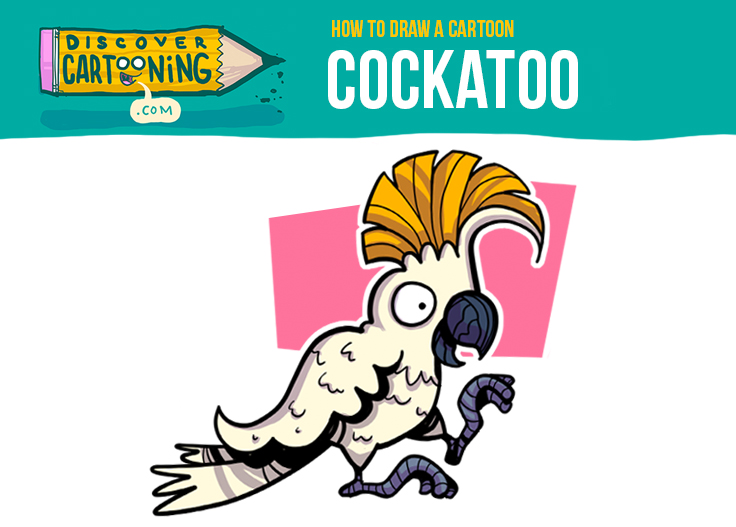 Before we begin, let’s just quickly go over the important traits of our cockatoo design.

The main feature of the cockatoo is its crest –

Plumage: Cockatoos have white plumage and a very puffy look to them! For this character I use a lot of curvy lines to capture its puffiness, however! I made its plumage a tiny bit off-white, just to add a bit of extra colour to the character. That’s just a last minute choice I made – but for your cockatoo, feel free to keep its feathers white.

Beak: A cockatoo is a type of parrot, so we’ll be giving him a nice hooky parrot beak

Feet: Cockatoos have grey feet – not as pretty as the toucan’s feet, but that’s okay.

The Cockatoo in this tutorial was created in Adobe Photoshop, but you can use pens, pencils, paint – whatever you prefer. If you’re using pencils, make sure you go over your character with two or three layers, as this will make the colours richer and more vivid.

The materials I use when drawing cartoons are as follows:

So those are the materials that I usually use, but ultimately just feel free to use any brand or medium that you may have on hand. Okay, let’s get started with our sketch!

How to Draw a Cockatoo Part 1: The Pencil Sketch

Step 2: Plan out the beak and eye – draw in a circle for the eye and add another oval on the right side of the head for the beak

Step 3: Draw in the top and bottom of the beak. Start planning out the cockatoo’s crest with a candy cane curve sticking out at the front and a small curve at the back.

Step 4: Connect the front and back of the crest with a smooth arc

Step 5: Now put in some lines for the different sections of the crest

Step 6: Following the curve of the cockatoo’s back, add in its wing. In kind of looks like a giant, stretched out comma!

Step 7: Let’s now add in the tail and upper legs – put in a loooong triangle for his tail and for his legs, draw two little triangle’s poking out of his belly!

Step 8: Keep working on those legs! Add in two little… what are they… they kinda look like back to front question marks!

Okay, I think we’ve put in enough information for our sketch. Now we are ready for the next stage on how to draw a cockatoo… let’s now do some inking! Remember that we don’t always stick to exactly what we’ve done in this stage – It’s just our foundation that we will now build upon in…

How to Draw a Cockatoo Part 2: The Inking Stage

When working on paper, the majority of my inking is done with a thick black pen – once I get to the details at Step 16, I’ll then switch over to a thin black pen.

Step 9: Draw in the beak and the eye – and if you are a pro at drawing small dots, now’s your chance to shine by drawing in the cockatoo’s pupil.

Step 10: Using your pencil sketch as a guide, ink in a more detailed crest by adding in little triangular gaps

Step 12: Ink in his belly and legs – his right leg is closest to us so make sure it becomes part of one continuous shape with this belly. His left leg is in the background, so that can be inked in as a separate shape

Step 13: Let’s spruce up his tail feathers – the triangular tail in the sketch needs to be more organic, so using it as a rough guide, add in long curved lines on the sides and some more lumpy waves for the ends!

Step14: Now ink in his feet – to add some depth, draw in some little cockatoo toes sticking out from behind his ‘question mark’ feet

Step 15: That’s the main outlining done! Now let’s drop in some solid, black shadows. The most shadow will be under his wing, under his upper beak and on his background leg. Feel free to put in shadows in other areas as well, but be careful not to overdo it, otherwise the image will look a little too busy.

Step 16: Now for the fun part – putting in the details! When I’m creating cartoons with pens and paper, this is where I use my thin pen (line variation is always important – if all the lines are too thick then this can also make the image look too busy). Draw in a few soft looking ‘w’s to denote his puffy cockatoo plumage! Then add in some striation lines on his feet and some lines on his crest starting at the top of the crest and connecting to the top of his head. Finally, add some curves to his beak to make it look a little more three-dimensional.

Once you are happy with the details, then it’s on to the final stage on how to draw a cockatoo. The coloring!

How to Draw a Cockatoo Part 3: The Colouring Stage

Step 17: Add in the base colours – a dark blue for the beak and a grey for his feet. Cockatoo’s crests are a ‘cool’ yellow (i.e. a yellow that is skewing towards green on the colour wheel). For this character, I’ve coloured his crest with a very warm orange-yellow. There’s not much colour in this bird, so putting in a warmer yellow makes it look a bit more appealing to me. For his plumage, I coloured it in with a very faint yellow – but feel free just to leave yours white if you want to.

Step 18: Okey dokes, we are the final step! I’ve just put in the finishing touches with some subtle transparent shadows – in Adobe Photoshop this is can be done on a new layer above your colour layer – draw in the shadows with a dark purple and then lower the opacity until you’re happy with the effect. When I’m using colouring pencils, I just use a purple pencil and lightly shade in the areas I want to be in shadow. Again, there’s not much colour on this birdy so I also put in a super duper confronting pretty pink background! Looks nothing like the Australian bush! Ah well.

I created this cartoon by looking at reference photos of cockatoos – I tried to break down its appearance using basic shapes and after a few designs, I settled on the one that you see on this page.

Remember to think big and then go small. Start with big shapes – if your character doesn’t look good at this early stage, then it probably won’t look good when you slap a whole bunch of details on it either! Once you’ve drafted up a rough design that you think looks cool, then go ahead and give it some tender loving black pen and colours!

Once you’ve copied my cockatoo, feel free to try some of your own designs. Jump on Google and study a few photos that interest you, then try and simplify your subject down into basic shapes and build it up into your own cartoon character!

I hope you have enjoyed this tutorial on how to draw a cockatoo, if you are ready to get started with cartooning, feel free to check out some of my online courses here : https://www.discovercartooning.com/courses/

Aaaand if you’re still reading this – Thank you so much for stopping by and I’ll see you in another post soon! 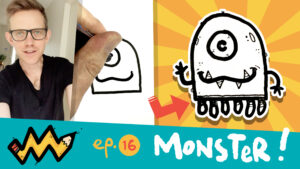